By: Karlene Blakemore-Mowle
Congratulations to "Colleen", the winner of Karlene's giveaway. Thank you to all who participated.
G’day! I’m Karlene Blakemore-Mowle and I’m from Australia… is it just me or does that sound like the introduction to some kind of addiction group? Anyway, I also write romantic suspense and I was thrilled to find this blog and see so many others who love this fantastic genre.
I have three titles coming out this year- Operation Summer Storm is book one in my Operation series and was released in January. The sequel, book two, Operation Willow Quest was released in February.
Then in April, I have Fallout being released. 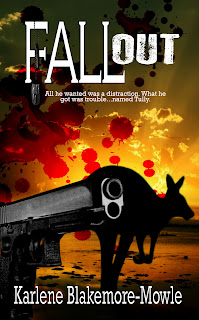 What do all these books have in common? I hear you ask (okay I didn’t but I’m really hoping you are wondering!) well I’m glad you asked! There’s romance of course, and suspense and there’s also a distinctive Australian flavour. Did I mention there were also hot men who know how to serve and protect? And women who are not simpering, delicate, wall flowers.
Here’s the blurb from my latest release, Fallout:


Tully Chambers is no damsel in distress.  An up and coming detective, she had her sights set on promotion until the day her partner was murdered and she ended up on the run from the mob.
Jake Holden has demons of his own.  Having served his country for over twenty years, he’s found himself wounded, alone, and without a plan for his future. What starts as a simple diversion—figuring out the feisty little waitress next door—turns out to be his most dangerous mission yet.
From the tropics of Far North Queensland to the rugged interior of Northern Territory in Australia, two modern-day warriors discover their greatest fear isn’t that of a madman’s revenge–but of laying their hearts on the line for love.
Want to find out more? Drop by my webpage http://www.karlybm.webs.com/
Or look me up on my new face book page
You can buy all my titles from Amazon
Karlene will be giving away a digital copy of FALLOUT to one lucky commenter.

Giveaway ends 10pm EST April 3rd. Please supply your email in the post. You may use spaces or full text for security. (ex. jsmith at gmail dot com) If you do not wish to supply your email, or have trouble posting, please email justromanticsuspense @ gmail.com with a subject title of JRS GIVEAWAY to be entered in the current giveaway.
Posted by Maureen A. Miller at 5:13:00 AM