Villains Are People Too

By: Joan Swan
Congratulations to Tammy Y, the winner of Joan's giveaway. Thank you to all who participated.
Memorable, compelling characters—that's what good fiction boils down to.  And, yes, this includes your villains.
Your villain was an innocent child once. What changed? Why did it change? And most importantly, most revealing...how did he change in reaction to those events?
The challenges we face throughout life and how we respond to them shape the internal landscapes of each of us--in both good and bad ways.  Which means your villain has both good and bad qualities.
No one is bad all the time. Villains need positive traits, too. Traits that make him sympathetic to the reader. Traits that allow the reader to empathize, maybe even identify with the villain in a small way. Understand how he became what he had become, because if a reader can’t relate to your villain in any way, they will be disconnect and less invested in your story’s outcome.
For the sake of example, let's say your villain's father was oppressive.
That one element could create a variety of negative issues for your villain:
To illustrate how the same situation could produce positive qualities depending on the person, let's take the examples above and turn them around.
The same villain, the same oppressive father. How did that affect your villain in a positive way?
Your villain's unique personality—why will your readers remember him?
Like all characters, your villain's distinctive qualities should evolve organically. In other words, his uniqueness should stem from the way he reacted and internalized lifetime events (as shown above.)
There are as many reactions to a particular hardship as there are people on earth. We all know or have heard of a family—same parents, same home, same school, equal treatment—where two of the kids turn out successful, compassionate, well-adjusted, and one who turns out a repeat failure, selfish, a social reject.
Every living person is unique—thoughts, behaviors, preferences, dispositions, wants, dreams.
Apply that concept to your villain and watch him puff from a cardboard cutout into a living, breathing bad guy.
How do you add dimension to your villains?  What author do you feel does a stellar job of crafting villains?


Author Bio:  Joan Swan is a triple RWA® Golden Heart finalist and writes sexy romantic suspense with a paranormal twist.  Her debut novel with Kensington Brava, FEVER, releases February 28, 2012.  Her second novel, BLAZE, follows in October, 2012. In her day job, she works as a sonographer for one of the top ten medical facilities in the nation and lives on the California central coast in beautiful wine country with her husband and two daughters. 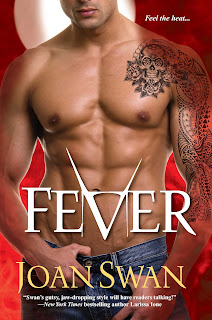 Dr. Alyssa Foster will admit to a bad boy fetish…
But when she finds herself face to face with a convicted murderer with determination for freedom and an eye on her as his get out of jail free card, Alyssa knows she’s in deep trouble…. Not just because Teague Creek is a prisoner desperate for freedom, but because his every touch makes her desperate for more.

A man with a life sentence has nothing to lose…

Teague Creek has one shot at freedom, but his plan to escape with a hostage develops a fatal flaw: Alyssa. On the run from both the law and deadly undercover operatives who know of his strange abilities, he needs to avoid trouble, but every heated kiss tells him the fire between them could be just as devastating as the flames that changed him forever.
Buy links:  Amazon| Barnes & Noble | Booksamillion
My links:  Website | Blog | Twitter | Facebook | Goodreads
Giveaway:
*A print copy of FEVER, US/Canada shipping.
*All comments are eligible for tour grand prize of either a COLOR NOOK or KINDLE FIRE. Enter: http://joanswan.com/giveaways/blog-tour-ereader/


Giveaway ends 10pm EST March 20th. Please supply your email in the post. You may use spaces or full text for security. (ex. jsmith at gmail dot com) If you do not wish to supply your email, or have trouble posting, please email justromanticsuspense @ gmail.com with a subject title of JRS GIVEAWAY to be entered in the current giveaway.
Posted by Maureen A. Miller at 5:33:00 AM