ORDER OUT OF CHAOS


I'll be giving away a $25 amazon.com gift card to a commenter selected at random. 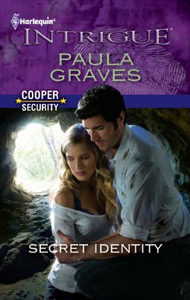 And be sure to check out my new book, out this month:  SECRET IDENTITY is the first book in my brand new Harlequin Intrigue series, Cooper Security.  How about a story blurb?
Since leaving the CIA under questionable circumstances, Amanda Caldwell has been living a quiet, uneventful life in a sleepy mountain town. But when Rick Cooper, her former partner—and former lover—makes an unexpected reappearance, she senses things are about to get a lot more interesting.…
Rick's mission is to protect Amanda and her identity from an assassin who's picked up her trail. It isn't long before working together stirs up all the passion and energy they'd once shared on the job. And in Rick's bed. Still, there's more to Rick's assignment than he can share with his "partner." Revealing the truth wouldn't be smart. But keeping his secret could be deadly.
Giveaway ends 9pm EST March 3rd. Please supply your email in the post. You may use spaces or full text for security. (ex. jsmith at gmail dot com) If you do not wish to supply your email, or have trouble posting, please email justromanticsuspense @ gmail.com with a subject title of JRS GIVEAWAY to be entered in the current giveaway. This giveaway applies to US and CANADA mailing addresses only. If the winner falls outside this category they are eligible to receive a signed book from Ms.Grave's backlist.
Posted by Maureen A. Miller at 5:00:00 AM