By: Kaylea Cross
Congratulations to Erin, the winner of Kaylea's giveaway. Kaylea is away but will be contacting you regarding your prize shortly. Thank you to all who participated.
Thanks so much for having me here today!
So, what’s your favorite subgenre of romantic suspense? I know I’m biased, but mine is military romantic suspense. Stories featuring strong military heroes (and sometimes military heroines) with the military action/intrigue forming the backbone of the suspense plot. In particular, I love Special Ops heroes, and one of my favorite things about writing this kind of hero is researching them. Yes, I’m a geek, and proud of it. 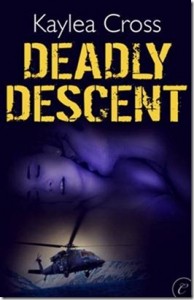 I have great respect for our military personnel and their families, and I hope it shines through in my work. The newest series I’m working on is Bagram Special Ops, and the first book is Deadly Descent. It features both a military hero (Air Force Pararescue Jumper), and a medevac helicopter pilot heroine, both stationed at Bagram Airfield, Afghanistan. I hope I’ve done our men and women in uniform proud with this book.
Blurb: Devon Crawford is an officer; Pararescueman Cam Munro is enlisted. Dev flies medical evacuations; Cam jumps into danger zones to save lives. Dev wants to return home from Afghanistan with her heart untouched; Cam will do anything to win the woman he loves.
Reaching for happiness in a war zone is the last thing Captain Devon Crawford plans, but she can’t ignore the feelings she’s hidden for so long. Cam’s sexy charm and wicked kisses weaken her resistance, but she’s too afraid of losing him to give in.
When Dev’s helicopter and crew are shot down and set up as bait by notorious warlord, Cam risks it all to save the team. What he doesn’t know is that the trap is set for him…
Excerpt:
She kept firing, heartened that some SEALs remained out front. It wasn’t like they’d deserted her.
Her gun clicked when she squeezed the trigger. Empty.
Shit, out of ammo again. She reloaded. Her gaze swept past the SEALs toward the Chinook. She cried out in relief when she saw Cam running flat out toward her. He moved like a blur, weapon firing.
He came barreling into the rock shelter and skidded to his knees beside her. “Come on,” he yelled over the noise.
Still holding her weapon, she grabbed a fistful of his uniform as he levered her onto his shoulders. Amidst the whine and ping of the rounds landing around them, he ran for the Chinook. She kept firing in bursts toward the enemy, and stopped only when she felt the heavy rotor wash beating at her back. A howl of agony ripped from her throat as Cam flipped her off his shoulder and all but tossed her into the cabin.
Someone grabbed her under the armpits and hauled her backward away from the ramp as Cam jumped inside. Black spots swam before her eyes.
“Talk to me, Spike.”
She turned her head at Ryan’s voice. “I’m okay!”
He moved away toward the cockpit. The inside of the bird was so crowded with bodies she couldn’t tell who was who. The pitch of the big engines changed, rising to a shrill scream as the bird struggled to take off. Fighting back the pain, she found Cam at last near the ramp and met his stare. The gunners were still firing from their positions. The bird shuddered and strained under the burden of all its passengers.
Oh God. They were overweight. The engines were already maxed out.
Cam exchanged a long look with Jackson, then pushed his way over to her. She grabbed his upper arms and leaned forward to shout. “They need to throw some ammo and equipment out, or—”
“Listen to me.” His eyes were the most intense she’d ever seen them. She stilled.
He surrounded her with his arms for a second before kissing her hard and pulling back. He shook her once, staring down intently at her. “I love you.”
Her heart stopped beating.
He wouldn’t. She read the intent in his eyes. “No, don’t—”
“Hang on to this for me,” he shouted. He yanked out the chain she’d given him and put it in her stiff hand. Then he turned and disappeared down the tail ramp.
She threw out a hand to grab him. Stop him. But her fingers only grabbed air. “Cam!” He didn’t stop. Didn’t so much as hesitate as he jumped off the tail ramp and joined the SEALs still on the ground around the Chinook.
“Cam, no!” Heedless of the pain in her leg, she pulled herself toward the closing ramp. Desperate to get to him before it was too late.
She tripped on someone’s leg and went down, crying out in agony as her wounded knee smashed into the steel floor. Hard hands gripped her waist. Yanked her up and back. She fought them.
“Dev, don’t.”
Ryan. Mindless, she ripped at his restraining hands. “Let me go! He’s going to get killed!”
Ryan hauled her up and into his arms, holding her tight as the Chinook lifted off the ground. She fought him with all her strength. “Is he on the Hawk?”
“Dev—”
“Is he on one of the Hawks!”
“I…I don’t know.” He held her tighter. Cutting off her breath. She weakened and stopped fighting.
Her body was stiff with denial. She was sobbing now, hysterical. “W-we have to g-get him.”
“He’ll get out, Dev. I promise you.”
The pain was suffocating. She couldn’t breathe. Couldn’t ease the splitting sensation in her chest. The tears flowed fast and hot down her cheeks. They soaked the front of Ryan’s fatigues as the bird rose into the dark sky and left the man she loved behind.
I hope I keep you on the edge of your seat with this one! Please share the titles of your favorite romantic suspense books with me for a chance to win a digital copy of Deadly Descent.
Happy reading!
Kaylea Cross
Please note, Kaylea is out of town engaged in exotic research. She thanks you for stopping by, and she will be commenting as soon as she returns!


Giveaway ends 9pm EST March 25th. Please supply your email in the post. You may use spaces or full text for security. (ex. jsmith at gmail dot com) If you do not wish to supply your email, or have trouble posting, please email justromanticsuspense @ gmail.com with a subject title of JRS GIVEAWAY to be entered in the current giveaway.