The Lure of The Bad Boy Hero

By: Gail Barrett
Congratulations to "Steph", the winner of Gail's giveaway. Thank you to everyone who participated!
When I say “romantic suspense hero” what professions spring to mind?  Detectives?  Cops?  Military or Special Forces?
That’s certainly what came to my mind when I sat down one day to brainstorm heroes for a new miniseries I wanted to write.  I already knew I wanted to create an open-ended series -- something I could add to as inspiration struck.  And while I was fine having some overlapping characters, I didn’t want people to have to read the books in a particular order.  I’m always disappointed when I pick up a book I think I’ll enjoy, only to discover that I’ve come in halfway through the series and don’t know who everyone is.
So that meant creating an agency of some sort, an organization where characters could vary, depending on the plot.  And since romantic suspense heroes need certain skills to do their job, the most likely type of agency would be one related to the military or police -- SWAT teams, cold case detectives, Black Ops or Navy SEALS.
But while I love special ops or law-enforcement heroes, I didn’t want to base my new miniseries on them.  Not only have they been done often, but they’ve been done well.  Extremely well.  Probably much better than I could ever do.  I wasn’t sure I had a unique enough twist on them to contribute anything fresh.
And truthfully, I’ve always been more intrigued by men who don’t obey the rules -- those darker, murkier characters who follow their own moral principles, meting out justice as they see fit.  So I decided to buck tradition and invent a more offbeat group, a secretive, loosely affiliated association of thieves, spies, and rogues who operate in that gray area between right and wrong -- usually outside the law.  Of course, since these are romantic heroes, they really are the good guys, albeit in a less traditional way.

Harlequin loved the idea.  They named the group The Stealth Knights and gave them slogan: The Stealth Knights: powerful, passionate heroes with their own code of law.  They also created a cool little “flash” logo which consists of a shield with swords.
Despite their medieval sounding name, these are very contemporary heroes.  And while I set the first two books (High-Risk Reunion and High-Stakes Affair) in a fictitious, Pyrenees Mountain kingdom, the Stealth Knights will operate anywhere in the world they need to go.
To give you a better idea about the heroes, here’s the back cover copy from my current Stealth Knights book High-Stakes Affair: 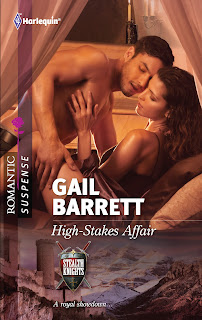 With her country on the brink of unrest, loyal Princess Paloma Vergara escapes the security of the palace walls to protect her family.  To eliminate the threat of blackmail against her brother, the heir to the Vergara legacy, she must enlist the help of an ex-con with a very special set of skills.
Dante Quevedo has his own dark agenda: avenge his sister’s death.  Teaming up with the royal beauty makes revenge all the easier to claim.  Until they stumble upon a terrorist plot that leaves them with no one but each other to trust...
So what kind of romantic suspense heroes do you enjoy the most?  Do you like reading about bad boys and other, less conventional men?  I certainly had fun creating The Stealth Knights.  I hope you’ll enjoy them as much as I do!

Gail will be giving away a print or ebook (Kindle or Nook format) of High-Stakes Affair to one lucky commentor!
Giveaway ends 9pm EST March 5th. Please supply your email in the post. You may use spaces or full text for security. (ex. jsmith at gmail dot com) If you do not wish to supply your email, or have trouble posting, please email justromanticsuspense @ gmail.com with a subject title of JRS GIVEAWAY to be entered in the current giveaway.
Posted by Maureen A. Miller at 5:30:00 AM