By: Karen Cote'
Karen graciously awarded prizes to two randomly selected commenters. Those winners are, "Sally", who has won a digital copy of EROTIC DECEPTION, and "Na", the winner of a $10 Amazon Gift Certificate. Thank you to all who participated.
An Interview of the Cast from Erotic Deception by Karen Cote’ starring Lily Delaney and Jet Walker.
Lily sat up in her chair. “What are you doing here?”
Looking no less surprised, Jet scowled. “What are you doing here?”
Her blonde brows knitted. “I was asked to come here and talk about my brother’s death in that Romantic Suspense Karen Cote’ wrote. You know…Erotic Deception?”
“Of course,” Jet sighed and sank down in the adjacent black leather chair. “You’re the reason they want to do this interview here today at Just Romantic Suspense.”
Irritation crinkled her nose. “I’m the reason?”
A sexy quirk tilted one side of Jet’s mouth. “All this talk about murder and being threatened turned our lives into a suspense novel.”
“And you still don’t believe me, do you Jet?” Lily swiveled her chair in agitation. “You think I’m just imagining it all.”
He shook his head. “I don’t know what to think.” A short pause and then, “He’s a District Attorney, Lily. He’s supposed to uphold the law. Not break it.”
“Supposed to being the operative words,” she shot back.
Jet leaned his dark head wearily back against the chair and closed his eyes, essentially ignoring her remark. “How long have you been waiting? I’d like to get this over with as soon as possible. I’ve got stuff to do.”
“Like what?” Lily used sarcasm to combat the butterflies in her abdomen caused by long lashes against dark cheeks. “Arresting frogs who refuse to ribbet to your command?”
He opened one eye to peer at her for a second before closing it, leaving behind the hint of a smile.
Lily silently growled at the impact such a small gesture had on her senses.
She tore her eyes away and muttered under her breath, “I might’ve been the reason for the suspense in this novel but you’re the reason for the romance. No man has the right to be so darned sexy.”
The penetration of his gaze tugged on her and she glanced warily back and caught those dark lashes now narrowed around his baby blues. Had he heard her?
“Do you think I’m sexy?” he asked lazily, effectively answering her question.
Lily scowled. “Didn’t your superior detective skills let you in on that little secret? Surely one of your many pillow-companions had plumped up that ego of yours.”
This time Jet didn’t hide his amusement. “Jealous?”
Her own green eyes flashed. “Of whom? Your wife or your mistress?”
Irritation darkened his face. “Stop calling her my wife. She’s my ex. End of story.”
Lily shrugged her slim shoulders. “She’s the one who introduced herself as your wife,” Lily pointed out. “Might want to have a teeny-weeny talk with her about that minor detail.”
Jet shook his head and rose from his chair. Lily tensed when he stopped in front of her but refused to let him know how disturbed she was at his close proximity.
When he reached out his hand and tilted her chin up, her breathing halted altogether. One of his lean fingers stroked the soft curve of her neck as his eyes focused on her lips.
His husky tone brushed a whisper of promise across her vulnerable flesh.
“Why don’t we put that smart little mouth of yours to better use, hmmm?”
Lily put up a resistant hand to prevent the descent of Jet’s intention.
“You do realize we are only characters in a book, right? That this isn’t real?”
His slow sensual smile made a mockery of her protest. “Now who told you that? Some non-fiction writer?” He chuckled. “What do they know? They think life is made up of some text-book experience, but we know better, don’t we? You – me. We’re all caught up in some type of story on some level. After all, isn’t every day for each of us a Romantic Suspense of that thing we call…tomorrow?”
Erotic Deception by Karen Cote’
Blurb: 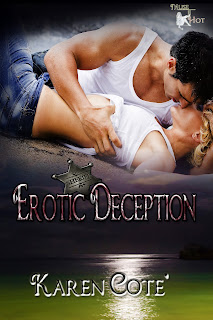 Her brother was dead. He’d practically raised her and stood by her during a miscarriage that left her barren. He’d been the sole person she’d had left in this world. How had Dr. Lily Delaney with a PhD in Psychology missed the psychotic signs of Anthony Capriccio, the Kansas City District Attorney and her ex-fiancé? Now at twenty-nine she was on the run to hide from the impending threats to her own life. But on the road to a safe secluded lake community, Lily crashes into the path of a new dangerous element, literally. One with deep blue eyes who totes a badge and carries a gun. And would their budding relationship be threatened when Lily finds out her own doctor had lied and discovers she really can have children? How would the sheriff take knowing she’d gotten pregnant when she’d already heartily assured him she wasn’t?
After his experience as a detective in Kansas City, Missouri, Jet Walker enjoyed his life as sheriff of the quiet lake community, Windom Hills. However, when Lily Delaney literally crashes into his car and life, his world disrupts into chaos. Couldn’t the woman do anything normal? Between fighting to protect her and fighting against his growing attraction for her, the previous peace Jet had found was now falling apart. And how could he possibly trust another woman after the trick his ex-wife played in trying to pass off another man’s child as his?
Author Bio: Karen lives in a California Castle with Prince Charming and a Magnificent Black Stallion. Okay, it's a bungalow, a corporate husband and a small black pug who totes a sense of humor and lotsa attitude. But it is her dream. A real life dream to inspire the romantic suspense novels she writes.
LEARN MORE AT WWW.KARENCOTE.TV
Posted by Maureen A. Miller at 5:47:00 AM