By: Kat Martin
Congratulations to "LS", the winner of Kat Martin's giveaway. Thank you to all who participated.
For years I wrote historical romance novels.  The time-frame and settings demanded a lot of research.  Now I’m writing mostly Contemporary Romantic suspense and the odd thing is, in a different way, they required just as much research as the historicals.
For AGAINST THE NIGHT, my latest release, out the end of February, my husband and I headed for .  Of course, having been raised in the about a hundred miles away, I’d spent a lot of time in and pretty well knew my way around.  But AGAINST THE NIGHT is set on the Sunset Strip, and I wanted to refresh my memory and also learn a little more about the night life on the Strip.
The novel is Johnnie Riggs’ story, the fifth in my AGAINST series, that started with Against the Wind.  Johnnie’s an ex-Army Ranger turn P.I, whose specialty is the underbelly of the city.  He knows the Strip, lives and works in of an apartment that looks out over his domain.  In a place called the Kitty Cat Club where he’s working on assignment, Johnnie first spots Angel Fontaine, a petite blond exotic dancer.
From the moment he sees her, John Riggs wants her in his bed.  The problem is that Angel Fontaine is really Amy Brewer, a kindergarten teacher from Michigan, a young woman risking her life to find her missing sister, whose job she has taken in the club.
For our research trip, we stayed at the London West Hollywood, a swanky hotel just off the Strip that caters to rock stars, international travelers, and the hip crowd.  A great place for a writer to just sit and do some serious people watching.
My hubby and I went to dinner at a restaurant called Boa our first night in town, kind of an in-spot for the neighborhood.  The next night we walked the Strip. 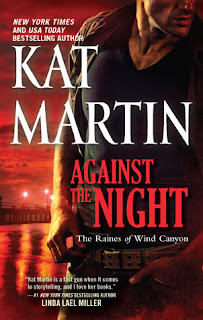 What a fun experience that turned out to be!  Not only did it help me get a feel for the area, but as we were meandering along, we walked into a large, old-fashioned bookstore, long-established in the area.  I had just hit the New York Times for my second AGAINST book, which my hubby told the booksellers and they were really excited for me.
So excited they insisted we stop by a little offbeat restaurant they said had great Mexican food and they were sure we would love.  We almost didn’t go.  It was getting late and we were leaving for home in the morning.  Then we thought, what the heck?  Let’s go inside and at least say hello.
We were glad we did!  The booksellers had called ahead and the owner was waiting--with a flight of some expensive brand of tequila, which he insisted we drink to celebrate the Times list.  I’m a wine drinker normally, but this just looked like fun and so we tried it and it was amazing.
Then someone came in and brought us a flight of cocoa tequila and peppermint tequila and so we tried those, too.  We were walking not driving, but still...
I was glad when the food arrived and the booksellers were right--the meal was delicious.  Or maybe everything just tastes wonderful after a few shots of tequila!
I hope you’ll look for AGAINST THE NIGHT and that you enjoy Johnnie and Amy’s story.  After that, AGAINST THE SUN will be out the end of May.
Till then, all best and happy reading, Kat
Kat will be giving away give away a copy of Against the Night to one lucky commenter. The winner may choose from Kindle, Nook or paperback format.

Giveaway ends 9pm EST Feb. 28th. Please supply your email in the post. You may use spaces or full text for security. (ex. jsmith at gmail dot com) If you do not wish to supply your email, or have trouble posting, please email justromanticsuspense @ gmail.com with a subject title of JRS GIVEAWAY to be entered in the current giveaway.

He knows what goes on in the dark.
She’s got the face of an angel and the body of…well, isn’t that what he’d expect from an exotic dancer? But there’s something about this girl that Johnnie Riggs can’t shake. The former army ranger is hot on the trail of an elusive drug lord—and suddenly very hot under the collar, as well.
Amy’s got her own agenda to pursue: her sister is missing and Amy seems to be the only one who cares. She’ll enlist Johnnie's help and do her best to ignore her growing attraction to finally get some answers. But when the two trails begin to converge and reveal something even more sinister than they imagined, their mutual desire is the least of their problems. They’ll bring the truth to light…or die trying.
Barnes & Noble
Amazon
Indiebound
Facebook fan page
Posted by Maureen A. Miller at 5:31:00 AM