My Advice: Don't Plot a Murder in Public

By: Robin Perini
Congratulations to Janet, the winner of Robin's giveaway. Thank you to all who participated.
Writing can be a risky business. Let me rephrase that…plotting books in public places can be a VERY risky business.
I have one of those voices that carry. I can't even whisper without the entire room hearing me. It's great if you're speaking to someone who's hard of hearing…not so great when you're trying to be secretive. Not that I'm a pro at that either. 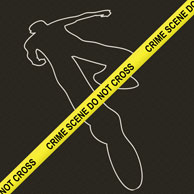 Most of the books I've written (some of which will never see the light of day) have suspense in them. And frankly, most have dead bodies. I just can't seem to help adding a corpse into my book. In Her Sights, my debut novel, has several. My second book, coming out in just a few weeks, Finding Her Son from Harlequin Intrigue, has nine…or maybe it's eleven. I lost count after about seven.
So, it probably won't surprise you that one of the things I do before starting a book is to make a list of unique and different ways for my villains to do their dirty work. Such was the case one evening in a local restaurant. The staff were kind enough to let me and my plotting partners to sit in a booth for hours upon end. I'm not sure if we were simply entertaining or disturbing, but they let us stay anyway.
I was working on a new story that was set nearby, in some spooky tunnels below a hospital. I'd walked down the corridors and decided, as is my predilection, that the cool, damp rooms would make a perfect murder site. I had my victim identified as well. An anatomy professor who had given me a grade that made me very unhappy. (Yes, I was one of those irritating A-students most people despise).
I couldn't use his name in the book, of course, but I would take my vengeance out on his doppelganger in my book. I mean, not getting an A has to be worth a painful death? Doesn't it?
So, I plotted my professor's demise, slipping back and forth between the real person and the character as writers sometimes do. So engrossed were we in our conversation—whether a gun would be too loud, or a silencer would dampen the noise enough, or whether a scalpel to the carotid would be too messy (we finally settled on potassium chloride)—when a man came up to our table.
I looked up. He was frowning, his brow furrowed in concentration. "Ladies," he said, his tone somber and serious. "I have to ask you what you're talking about."
He flipped open his badge.
My eyes grew as big as saucers. We began rapidly explaining all at once. When finally we clarified what we were doing, he smiled. "I thought it must be something like that," he said. "You're too smart to be real criminals."
Hmmm…I kind of grin when I think of that last statement, but the lesson is clear. It's not good to plot a murder in a public place. You don't know who might be listening.
Have you overheard or has someone overheard something you've said in a public place that you wish hadn't happened? Comment and you'll be entered to win a copy of my latest release, Finding Her Son from Harlequin Intrigue®.
Giveaway ends 9pm EST Feb. 19th. Please supply your email in the post. You may use spaces or full text for security. (ex. jsmith at gmail dot com) If you do not wish to supply your email, or have trouble posting, please email justromanticsuspense @ gmail.com with a subject title of JRS GIVEAWAY to be entered in the current giveaway.
FINDING HER SON 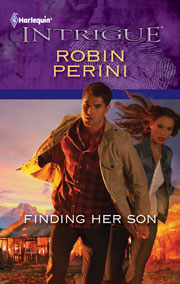 THE ONLY MAN A DESPERATE MOTHER CAN TRUST…
Investigating a cold case is SWAT cop Mitch Bradford’s worst nightmare—especially when it involves a kidnapped infant. But thanks to an injury, he’ll have to settle for following Emily Wentworth instead of breaking down doors and cuffing criminals.
The prime suspect in a mysterious disappearance, Emily has always claimed she was framed. And as he earns the trust of the incredibly desperate—and unbelievably beautiful— mother, every instinct tells Mitch to believe her. Then new evidence unfolds, revealing an elaborate conspiracy and forcing Emily into a deadly spotlight. Now, torn between loyalty to the badge and his promises to Emily, Mitch may have to make the ultimate sacrifice if he’s to bring her little boy home.
Chapter One
Cursing under his breath, Mitch Bradford yanked his collar up against the bitter Colorado wind. Where was Emily Wentworth going? He stalked across Colfax, on a stretch of the street known as a candy store for illicit drugs and prostitution. He could've been home alone in front of the fireplace, his bum leg propped up, nursing a stiff drink and a double dose of ibuprofen. The irony didn't amuse him. He'd been tapped for the Wentworth case because of his injury. One more reason to kill the guy who'd shot up his leg during his last SWAT operation.
Mitch ducked his head and plunged forward into the night, ignoring the exchange of money on the corner. He would've busted the dealer any other time, but he refused to let his suspect out of sight. When she approached a group of gang-bangers, he tensed and reached for his weapon.
Award-winning author Robin Perini is devoted to giving her readers fast-paced, high-stakes adventure with a love story sure to melt their hearts. Her mission's motto: "When danger and romance collide, no heart is safe." After seven prestigious Romance Writers of America® Golden Heart® finals, Robin sold seven novels within one year. She won the Golden Heart® in 2011, and that title became her first Harlequin Intrigue, Finding Her Son (March 2012). She is the author of In Her Sights (Montlake, 2011), Finding Her Son, Cowboy in the Crossfire and Christmas Conspiracy (Harlequin Intrigue 2012).
Robin loves to interact with readers. You can read excerpts, read reviews, sign up for her quarterly newsletter and mailing list, and even request trading cards or a Kindlegraph on her website at www.robinperini.com. She's also on Twitter, Facebook, and Goodreads. She'd love to hear from you.
Posted by Maureen A. Miller at 5:10:00 AM