What the Romantic Suspense Fuss is all About

Congratulations to Jo-Ann, the winner of a copy of Linda Lovely's DEAR KILLER! Thank you to all who participated!
What’s so special about romantic suspense? Romance and danger are two sure-fire triggers to get your heart thumping. This applies to readers and movie fans. Combine romance and suspense and you have a double threat. Inject a dose of humor and, in my opinion, you have the trifecta.
I’m going to use movie examples because I have too many favorite books and authors to single out a handful to prove my point. Classic romantic suspense movies include North By Northwest and Charade. These films endure because they’re loaded with suspense, and they up the personal stakes for the hero and heroine by giving them an irresistible attraction to a love who appears—at least at times—to be the enemy. Add witty dialogue for Cary Grant, the star of both of these films, and you have a barn burner.
Even recent shoot-em-up movies rely on love as an added motive for heroes or heroines to risk all in order to save their sweethearts. Examples that come to mind include Eagle Eye and Die Hard.
These movies have something else in common—strong heroines. That’s something else I look for in romantic suspense novels. Having been raised by a strong-willed single mother, who taught me women can do whatever they set their minds to, my favorite romantic suspense plots feature feisty heroines, who don’t take any guff from heroes and stand ready to act as equal partners.

My favorite romantic suspense novels often feature heroes or heroines who have enough life experience (and baggage) to make them intriguing. In my debut novel, DEAR KILLER, my security guard heroine (ex-military) is smart, athletic and funny. That proves an irresistible combination for the deputy/hero assigned to lead a murder investigation on the Lowcountry Sea Island where she works security. The fact that she’s 52 and he’s 40 adds even more fuel to their internal conflicts.
Linda is one of the many talented authors who belong to the Romance Writers of America’s Kiss of Death chapter. At Kiss of Death we believe that every great romance should include suspense. Whether a spy thriller in Regency times, a paranormal romance with a revenge-seeking zombie, or a traditional serial killer after the heroine, romance relies on suspense, leading the reader through the trials of the heroine and hero to see if they will get their happily ever after ending. If you can call your writing suspenseful, then the Kiss of Death has something for you! 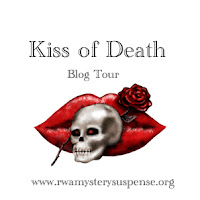 
Giveaway alert! Please comment about your favorite aspect of romantic suspense. At  9:00pm EST on Jan. 15, one lucky commenter will win a copy of DEAR KILLER.

Marley Clark, a retired military intelligence officer, works security for a Sea Island community simply to keep busy. A single night patrol transforms the feisty widow’s yawner of a job into a deadly battle of wits when she finds an islander drowned and bobbing naked amid a potpourri of veggies in a Jacuzzi.


Asked to serve as the lead investigator’s liaison, the 52-year-old heroine is startled to discover she’s become Deputy Braden Mann’s target as well—for romance. Yet their steamy attraction doesn’t deter the pair from sorting through a viper’s nest of suspects as the body count grows and the pun-loving killer plans a grizzly epitaph for Marley.

DEAR KILLER is the first in a series of Marley Clark adventures that dish up heart-pounding suspense with a side of romance.
Posted by Maureen A. Miller at 5:00:00 AM

Email ThisBlogThis!Share to TwitterShare to FacebookShare to Pinterest
Labels: RWA Kiss Of Death