ME AND JANET EVANOVICH

By: JB Lynn
Even though I’m a Jersey girl myself, I’d never read a Janet Evanovich novel until I’d completed my first draft of CONFESSIONS OF A SLIGHTLY NEUROTIC HITWOMAN. Once I’d shared the draft, one of my critique partners asked me if I’d read Evanovich’s books. When I said I hadn’t, she gave me the first few.
I’m glad she did, because otherwise I wouldn’t have understood some of the comments I’ve seen about my book. Things like, “It’s like Stephanie Plum on steroids.” and “CONFESSIONS OF A SLIGHTLY NEUROTIC HITWOMAN reads like the first Plum. But really, really twisted. Peyote twisted.”
Now that I’ve become a fan of those early Evanovich novels, I’m interested in the movie version of ONE FOR THE MONEY starring Katherine Heigl.
I know a lot of people weren’t pleased about Ms. Heigl being cast in the part of Stephanie Plum, but I think she might be able to pull it off. I also think that Debbie Reynolds as Grandma Mazur is BRILLIANT casting and I think Sherri Shepherd might be able to be a convincing Lula. (I heart Lula!!)
It’s the men I’m worried about.
I can’t envision Irishman Jason O’Mara as Joe Morelli and I really don’t see Daniel Sunjata when I think of Ranger.
Are you planning on seeing the movie? Are you a fan of the books? And most importantly: Morelli or Ranger?
JB 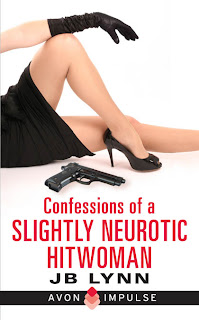 CONFESSIONS OF A SLIGHTLY NEUROTIC HITWOMAN
Maggie Lee is not your average hit woman. For one thing, she’s never killed anyone. For another, after hitting her head in the car accident that killed her sister, her new best friend is a talking lizard--a picky eater obsessed with Wheel of Fortune, who only Maggie can hear.
Maggie, who can barely take care of herself, is desperate to help her injured and orphaned niece get the best medical care possible, so she reluctantly accepts a mobster’s lucrative job offer: major cash to kill his monstrous son-in-law.
Paired with Patrick Mulligan, a charming murder mentor (who happens to moonlight as a police detective), Maggie stumbles down her new career path, contending with self-doubt, three meddling aunts, a semi-psychic friend predicting her doom, and a day job she hates. Oh, and let’s not forget about Paul Kowalski, the sexy beat cop who could throw her ass in jail if he finds out what she’s up to.
Training has never been this complicated! And, this time, Maggie has to get the job done. Because if she doesn’t – she’s the mob’s next target.
Available as an e-book now from all fine e-retailers. The mass market paperback, due out in February, can be pre-ordered.
Amazon
B&N